exploring my mind and spreading the light through blogging

Anti-Muslim Sentiment and the Media

2 people were subjected to violent anti-muslim attacks. The first was a Bangladeshi man who was beaten by a group of men, who called him a “fucking Arab”, outside a bronx restaurant just hours after the Boston attacks. The second attack also angered me but it also saddened me. A Boston man, apparently enraged by the Boston Bombings, assaulted a muslim woman walking with her children on Commercial Street. He punched her and yelled, “Fuck you Muslims! You are terrorist! I hate you! You are involved in the Boston Explosions! Fuckk you! First off this guy was a coward because a true man would never lay a hand on a woman. If he was so enraged at muslims he could have picked a male to assault but instead decided to prey on the weak and defenseless, what a man. Doesn’t he understand that violence cannot be counteracted with more violence. An eye for an eye will leave everybody blind. How ignorant do you have to be to think that because a Muslim person is responsible for an act of violence, all Muslims are responsible? What kind of shit is that? It’s the extremists who are the problem, and they can be found in any religion.

I don’t know if the two who perpetrated the Boston bombing labeled themselves as Muslim but a true practitioner of any religion would never commit such an act of violence. It goes against the golden rule which is one of the main teachings in almost every religion. Christianity: Do onto others as you would have them do to you. Judaism: What is hateful to you, do not do to your neighbor. Islam: Not one of you truly believes until you wish for others what you wish for yourself. Hinduism: This is the sum of duty: do not do to others what would cause pain if done to you. Taoism: Regard your neighbor’s gain as your own gain, and your neighbor’s loss as your own loss. Regardless of how you word it, it’s the same message in every religion and a true believer and practitioner should would never brake this golden rule. My point is that extremist are not truly religious people, at least not to me.

But you can’t only blame the guy who threw the punch, i also blame those responsible in informing him. I blame the media outlets like CNN, the associated press and others who falsely reported the perpetrator of the attack to be a “dark skin male”. I blame publications like the New York Post, who don’t have an ounce of journalistic integrity, which printed the photo of the two “bag men” who it said were being searched for in connection with the Boston bombings who were completely innocent. The post saw two dark skin males with backpacks and turned them into the terrorist. I blame Those who blamed a Saudi national, who was a student with no connection to the attacks and any other “news” outlet which spread rumors and lies. The media in many cases dissinfroms people doing the exact opposite of what they are supposed to do. They fill the airwaves with violence and terror creating a climate of fear and directing suspicion towards particular communities.

The two people responsible for the Boston Bombing and this idiot are not that far apart. While the scale of violence is different, they were both fueled by ignorance and hatred. Are we going to act like Nazi Germany who blamed the jewish people for all their problems and make Muslims and Islamics the new scapegoats. The religious wars should have ended with the crusades. In times of turmoil and panic we need to be sensitive, aware, cautious and most of all United.

We all need something to believe in, it gives us reason, meaning. I don’t understand why it’s so hard to allow others to have a different faith than you. The actions of this man are ignorant, foolish, embarrassing, and wrong. The same goes for the so called “news” outlets. We don’t need to spread more hate around, we need to learn to live in harmony. We all have common enemies to fight together: ignorance, fear, hatred, and violence. So be wary of mainstream news and their misinformation, be wary of ignorance, both in yourself and in others and like always keep growing, in the light direction. 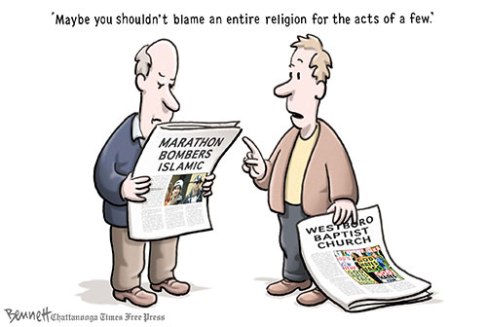